The queen of all soups.
That pretty much sums it up…
New York Times food critic Amanda Hesser describes it as
“One of the strangest and most delicious soup recipes…
By the time it is done,
the ‘soup’ is like a savory bread pudding
and the top has a thick, golden crust
that your guests will fight to the death over.”
I posted a recipe for this last year (link)
and it met with my taste tester’s approval.
…but I am always willing to try something new…
(‘if it ain’t broke don’t fix it’ doesn’t necessarily apply to my recipes)
So because I am on this new ‘tack’ (sailing term for you dirt people)
of re-creating my list of 44 French Classics..
here is my new (and maybe improved) version…
Will see what the Captain thinks..
One of the biggest hurdles in making this on a boat is the time it takes to caramelize the onions
(too much fuel consumed and it would seriously cut into our sailing time)
The proper caramelizing is what imparts that rich flavour to a well made onion soup and it can take up to 60 minutes to reach that effect.
…the rest of the process is easy.
So to save time I could suggest two options:
1. Caramelize the onions at home and bring a good supply onboard in ziploc bags.
This is what I did last year.
or
2. Find a way to speed up the maillard (browning/releasing of sugars) process
(see link for explanation)
#6
R.E.D. SOUPE À L’OIGNON GRATINÉE
(French Onion Soup) 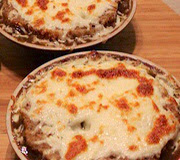 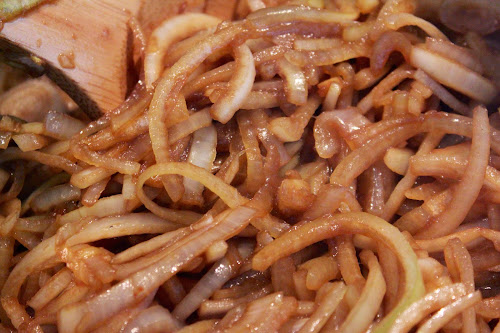 …after just 15 minutes…
The addition of the vinegar was a ‘just because I wanted to’.
It added another dimension to the flavour.
Once the onions are nicely browned, sprinkle with flour and stir to slightly thicken.
Add the stock, beer (another of my ‘just because’ things) and seasoning.
Simmer for 5-10 minutes to distribute the flavours.
Ladle into bowls, top with bread and sprinkle with cheese.
Place bowls under broiler or heated barbecue, cover and let cheese get all gooey and melty.
…A very satisfying warming boat soup and taste tester approved…